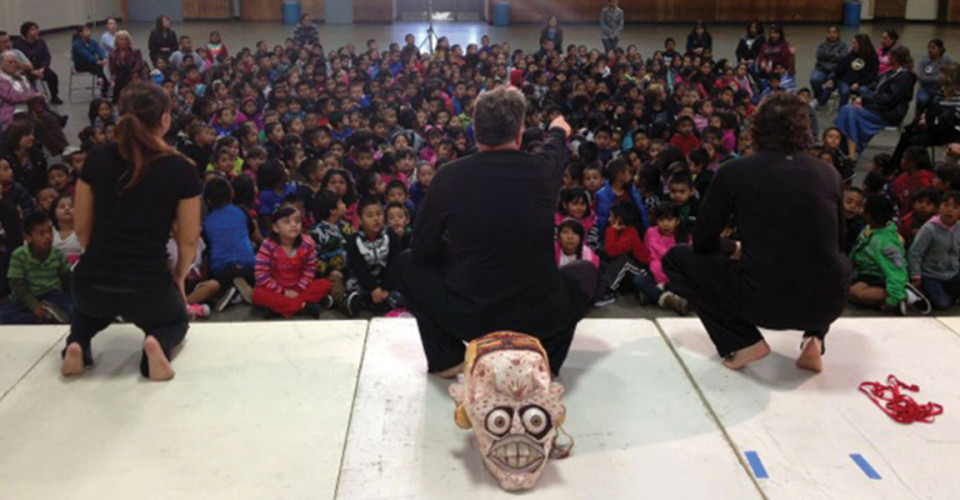 Boxtales residency programs stimulate minds, encourage teamwork, build character, develop self-esteem, unlock the imagination, develop sensitivity to others, and broaden awareness of the world as well as develop the tools to create interesting theatre and tell a clear story.

Boxtales residency programs include training in: acting, storytelling, characterization and so much more! Since the mid 90’s the members of Boxtales theatre Company have been studying multicultural performance traditions to inform the work, in many cases traveling to other countries to study with master teachers in: Acro-Yoga, Mime, Aerials & Circus skills, Brazilian Capoeira, Italian Commedia Dell’Arte and the South Indian dance and martial arts of Kalaripayattu, Kathakali and Mohiniattam to name a few.  Now we can bring this world master teacher training to your students!

The residencies are usually 12 sessions over a 12 week period. We like to have a minimum of 1 hour per session if possible.

There are 3 types of programs. One type is where we begin with an existing Boxtales play. This approach enables us to insure the production values are high in this limited time frame, as well as benefit the students by allowing them to work alongside the professionals in the company. (The drawback in this case is that there are fewer “juicy” roles for the students.) These programs include:

Another type is more traditional, where we teach and direct but don’t perform with the students, giving them all the roles. This program gives the kids more responsibility and some of them bigger roles. While we can’t guarantee the same production values with this approach, both the challenge to the kids, as well as the benefits are enhanced. These programs include:

Finally, we can create a program tailor made to fit your goals and resources. When space, time or goals call for more process and less performance outcome, sometimes we work with smaller stories, visual art, or poems to create vignettes. Feel free to discuss your needs with us if this feels right for your school.

Please contact Michael Andrews for pricing and scheduling, (805) 637-3632 or email at michaelandrewsa51@gmail.com

Benefits of the Program

All acting training, in a sense, is based on the simple practice of imagining what is like to be someone or something besides one’s self, thus creating understanding, empathy and awareness of others.

Some of our trust exercises, like “I’m Falling”, where participants catch each other when one of the group yells out “I’m Falling” and trustingly just begins to fall, or being blindfolded and lead through an environment, or having a group lift one participant up, over their heads and safely back to the ground, build trust in the group but also in oneself, and at the same time helps to build an expanded awareness and empathy for others.

Our updated version of the game “Red light, green light” teaches self-control, non-verbal communication, collaboration, and the importance of strategy.

Our “Mirroring” exercises force participants to look more carefully and try to do what others do. This increases attention ability as well as creating more awareness of the world around them.

We use many bamboo stick exercises, from the Philippines, that require intensity of focus, respect for others and advanced self-control.

Many of our exercises promote theme and symbol identification, pattern recognition and stimulate abstract thinking.

We have collected many improvisation technics. “Improv” is about getting out of our head and engaged with your partners, building playful, confident and responsive communication, spontaneity, and confidence on stage or in a leadership role. One of the central principles of improv is ‘yes, and’ – the idea of accepting what your partner offers you and building on it. We bypass a fear based, territorial, guarded mode which shuts us down as communicators and instead  create an internal state of generosity, connection, and self-assurance.

Our storytelling training helps us shape a message in the most compelling way for our audience. We work on the arc of the narrative, identify and hone the core or “essence” of the message, and how to make it clear and vivid.  Clarifying why your audience should care, and share your excitement, make it matter, make it fascinating, make it meaningful, and make it fun. We believe that to be successful at anything in life, storytelling is essential!

Generally we see that young people learn a great deal about themselves through these programs. The fun, artistic atmosphere allows us to challenge them more than they are used to, and in that challenge they find how far their resolve goes, how they perform under pressure, that they have previously undiscovered leadership skills, as well as a host of other character defining qualities.

This site uses Akismet to reduce spam. Learn how your comment data is processed.